What is recombinant antibody?

Recombinant antibody, also known as genetic engineering antibody, refers to the use of recombinant DNA and protein engineering technology to process, modify and reassemble the genes encoding antibodies according to different needs, and then transfect the antibody molecules expressed by appropriate receptor cells. Genetically engineered antibody (GEA) is a generic term for biopharmaceuticals prepared on the platform of high-tech biotechnology such as genetic engineering technology. 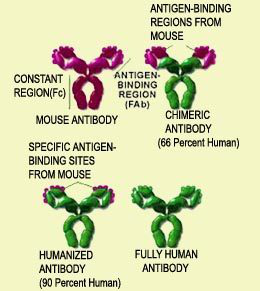 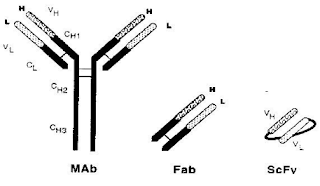 Single chain antibodies (SCFs) are composed of antibody heavy chain variable regions and light chain variable regions linked by short peptides of 15 to 20 amino acids. ScFv can retain its affinity to antigen, and has the characteristics of small molecular weight, strong penetration and weak antigenicity. Single chain antibody (SCFv) is a synthetic antibody expressed in E. coli by genetic engineering technology. It has only one chain of complete antibody, so it is named SCFv. There are three forms: (1) direct expression in cytoplasm; (2) fusion protein expression with other bacteria; (3) secretion and expression of functional single chain antibodies.

The two Fab fragments of the antibody can bind to two different antigens at the same time, such as specific antigens and effector cells. Two specific antibodies can be linked by chemical cross-linking and disulfide bond exchange or fused by two hybridoma cells. This kind of antibody contains two specific antigen binding sites of artificial antibodies, which can bridge between target cells and functional molecules (cells) and stimulate a directed immune response. It is a kind of genetic engineering antibody. It has become a hotspot in the field of antibody engineering and has broad application prospects in the immunotherapy of tumors.

1. Application in the Diagnosis and Treatment of Tumor Diseases

Radioimmunoassay is a radiolabeled antibody which can be injected into human body to show the binding of antigen and antibody at the tumor site. Because of its small molecular weight, rapid clearance and strong tissue penetration, genetic engineering antibodies such as single chain antibodies and Fab fragments are more suitable for radioimmunoimaging. Like. The directed therapy of malignant tumors is to fuse anti-tumor-associated antigen antibodies with a variety of molecules by recombinant technology. These molecules can provide important auxiliary functions after the antibody binds to the target molecule.

With the development of cell signal transduction and antibody engineering technology, intracellular antibody technology has been born. This technique refers to a new class of engineering antibodies expressed in cells and localized in subcellular compartments, such as nuclei, cytoplasm or some organelles, acting with specific target molecules to perform biological functions.

Biosensor and microarray technology will probably become the main diagnostic techniques in vitro in the near future. For a large number of diagnostic kits, antibodies have high sensitivity and specificity. From the initial glass interface to various protein affinity interfaces, the antibody micromatrix interface for diagnosis has been developing continuously.

The research band of recombinant antibody drugs follows the following principles: firstly, the drug must maintain the affinity between specificity and antibody, and pay special attention to the ability of anti-antibody heteroblastic antigen; secondly, the basic elimination or reduction of antibody immunity should be followed. In addition, the immune activation properties of antibodies should be taken into account.

Problems and countermeasures in the research of recombinant antibody drugs

There are still some problems in the large-scale production of recombinant antibiotics. Firstly, in order to ensure the activity of recombinant antibodies in the process of large-scale culture of animal cells, the methods of protein folding and disulfide bond formation must be correct. Secondly, perfusion culture technology needs to be improved.

Affinity of antibody directly affects the effect of antibody effect function after the modification of recombinant antibody, which is a problem in research and clinical application. Usually, humanized antibody in clinic can only achieve about 33%-50% of the binding capacity of mouse-derived antibody in the initial stage. Therefore, even the same component method can not be fully applied to all other antibodies. This leads to modification of the surface of the antibody in combination with molecular prediction and design.

For therapeutic recombinant antibody modification, we should take into account the molecular weight and half-life of the antibody. Usually, the ability to cross the blood vessel wall and blood-brain barrier depends mainly on the size of antibody molecules. For therapeutic antibodies, we need to ensure the integrity of Fc and increase the length of its stay in human body and the corresponding blood drug concentration in order to make it accessible.

Why You Should Invest In Pay-per-Click Advertising

Why Custom Carry Bags Are The Superior Choice For Business?

A Roadmap to the Future: Startup Tech Companies Breaking the Mould